jim.koudounis@live.com
The painting of these surfaces has become more complicated as well, both in the form of anticipating the range of color of the finished product but also the stages of the painting in an orderly fashion as to which needs to be painted first. Once this progression is made, going back to paint something again or to
change a color, may be impossible. Planning is a larger part of my work now, and to help out in this regard, is the use of an oil paint drying agent. The use of this product is useful in my new application by drying the paint quickly and by making the paint translucent, thereby allowing several layers to be applied and allowing the previous layers to shine through, each contributing to the finished product.
I find this an exciting new way to paint and also the finished product has so much to offer, as the picture changes throughout the day, giving a new look every time you see the picture.

How it all happened
It’s odd how sometimes things come together and the direction they take.
My woodworking has actually changed the way I do oil paintings and it all happened quite by chance.
One day I noticed a spec of what I perceived to be a piece of dirt in the bathroom sink.
​ It turned out to be rust.  It was in the sink of one of the vanities in my house. I thought " Oh my God, The thing has worn out and now it is starting to rust". So I looked at the other vanities ( I have 4 bathrooms) and
found they were on their last legs too. So now I had a major project on my hands.
I have to say that I gave this some thought and since I had designed and built many kitchens and bathrooms, I wanted to do something different this time,and since it was going to be for me, no harm done.
While I was contemplating this project, I was having a coffee near a pavilion at Pinafore Park in St Thomas. Right in front of me were these wonderful flowers which were (as I found out later) Magna lilies. ​ 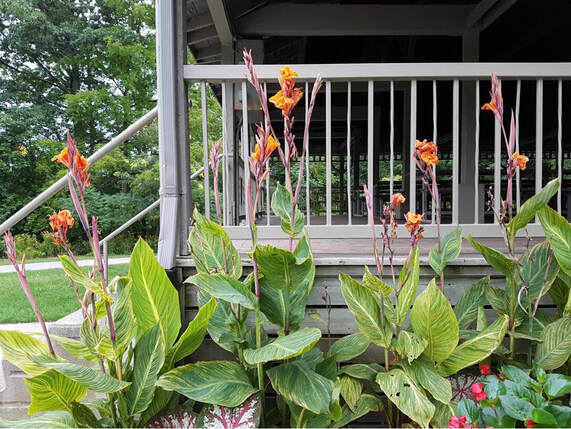 My thinking was that instead of doing the same type of woodwork in
front of the cabinetry, I would carve and paint something representing Spring and Summer, I’m not much of a Winter person.I completed the job (see pictures) and this I found was a neat way of painting.
It created a new dimension and the color range was amplified. Please read the
dialogue of the pictures for more detail.​
This is simulating what you might find looking out your window As you move past the window so does the image between you and your perspective. It is 8 feet long and 7 feet high and it stands three feet off the ground. The wood is carved and then painted in oils. There are approximately 9 layers of oil paint. It took nine months to complete and the frame is black cherry.
​

VROOM WITH A VIEW

When I relocated from London to St Thomas I didn't realize how close I was to the St. Thomas Airport. There were small aircraft flying overhead quite often so it should have given me some clue. It was slightly east of my house and I didn't go in that direction very often.
One day I passed the airport and I saw this wonderful looking plane.  It had these terrific colors on it and it reminded me of a majestic bird. ​ 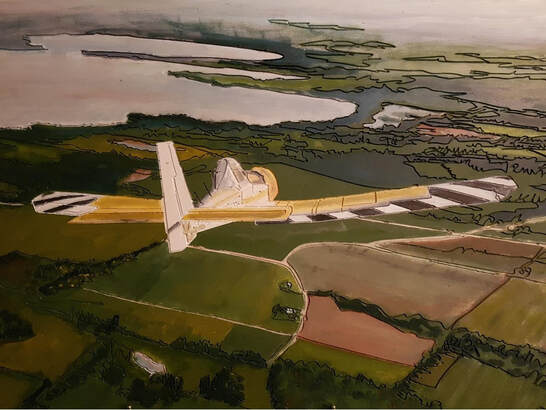 ​I took note of that as I kept driving to my destination. About a month later I drove by and I didn't see the airplane there and I wondered about what happened to it and I had this feeling of a wonderful opportunity lost.  Fortunately some time later, I drove by and I saw it again in a different spot on  the taxi Lanes and I thought this is an opportunity I can't let go I've got to get permission to see if I can take some photographs of it. I saw a mechanic working away at one of the hangars and asked if I could get close enough to the plane to take some photographs and he said it was fine to do so. It was July, 2017 and I took lots of photographs from different angles but I didn't really know what I was going to do with them at that point. But, I knew that I wanted to capture it in a beautiful setting; not sitting on the ground as it were.
As time went by I found another image that showed a lovely backdrop and I realized that the plane would suit it very well. So I played with the images and came up with a composition that felt right. After drawing it up, I carved the wood and started to paint. It was February , 2019 by the time I finished the painting in this new format of carving the image before painting, I realized that the light source played an important role in the visual image in the painting. The wings which had the segmented parts to it cast a shadow as the light source moved so it changed the color of the actual paint which I anticipated but it was even better than I had imagined. This was one of the first paintings that I realized how important a role the carved image and the light source would play.
It is one of my favourite paintings. As time passes, I start to miss it along with other paintings and so it comes time to view them again.  It’s a way of getting grounded.

The atmosphere in these performances was electric. I wanted to recreate this feeling of the ‘concert experience" . I also wanted to depict the multi talented Neil Young. What I came up with is a duel images of him playing a guitar and harmonica while playing the song, "Rock and Roll can never die". The one image is a
close up of his face and the other is his whole body. Both images are super imposed on each other and overlapping in specific areas. The hat intersects the hat in both images even though one is much smaller than the other. The harmonica is superimposed by the amplifier in the second image and the hairline is intersecting the clothing of the whole image picture. These images were then carved onto a wood panel, a process I have been working with for a couple of years, offers another dimension in colors and depth of the painting. If you see the painting, it would show much better than words can explain. Although happy with the outcome of the images, I wanted to explore the "concert experience". The images have been transformed by both the color and glare of the spotlights. The lines are not perfectly defined but mildly
distorted and fogged in. The result is a guitar that has a wavy neck and hair that has purple shades of color. There are many more examples, I don’t want to give them all away. You can check out the things have been transformed by the "concert experience".
Find out more by viewing the painting and most importantly, enjoy the process.

TAKEN  FOR A WALK

It wasn’t until 2019 that I would be prepared in my mind, and ready to proceed. I thought it would be a lot of fun to paint especially since I had been working on a new way of painting on Birch boards by carving the image first and giving a unique effect. It was a challenge to capture that feeling through, as it was an overcast day and the wet ground was wet. The painting had to be done in stages because the carved out areas had to be done first and with the forethought what the light and shadow effects could do to the final colors. An example of this effect could be realized by simply picking up the picture and holding it up, then turning on the spot while looking at the picture. The light source changes as you turn, so too the shadows are moving on the painting and in effect giving you a new look.
Finally February 26th 2019 I completed the picture and I was delighted with the results.
​It remains as one of my favourites.